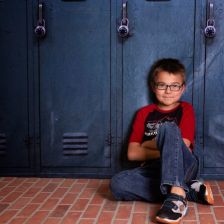 Our handsome September Child of the Month is 8 year old Beau:

In the fall of 2010, I was sitting in my office when I received a phone call from one of my apartment residents telling me that CPS was taking her newborn son away and she wanted to know if I could take him. Without hesitation I said yes, and CPS placed this precious 5 week old little guy with me. It was a common occurrence for me to watch the kids of other residents, and my husband asked me when the parents of this newborn baby would be picking him up. I looked at him and told him they would not be picking him up. But after only one short week, we were heartbroken when CPS placed Beau with members of his bio family. Three months later, Beau’s bio mother came to my office and told me that Beau was being abused and neglected by the family that had custody of him because they felt like he cried too much. She asked me if I could take him back. I immediately called the case worker and asked how I could get Beau back. On March 8, 2011, my life changed forever. I received a call from one of the people who had custody of Beau, telling me to come pick him up immediately. I called the case worker in a panic, and she told me to go get the baby right then. When I picked up Beau, he was tiny and the abuse and neglect he had suffered since he left my home was obvious and heartbreaking. The next couple of weeks were hectic. CPS told me that I had to get licensed if I wanted to adopt Beau and I did not think twice about it. I got licensed as quickly as possible, and on Beau’s first birthday both of his bio parents relinquished their parental rights. I thought that was my last hurdle, but the judge said the family members who had custody of Beau’s siblings should first be considered before I would be able to adopt Beau. My attorney told me not to worry about it, but all I could say is, “How can I not worry when I have raised this little guy and loved him like he was my own?” Finally, on March 30, 2012, I was able to adopt Beau. While our road to adoption was not an easy one and while Beau had his own struggles to overcome, today Beau is a happy 8 year old child who is in the Gifted and Talented program at LISD. He is a sweet and smart boy who always tells me that I’m the best mom in the world. And of course now he wants brothers and sisters his age to play with!